A gut bacteria is a bunch of friendly creatures who can make our lives miserable or blessed with clearness and sharpness of mind. The gut bacteria for brain has interesting connections.

Bacteria lived in human the gut a million years ago. The body colonized with the enormous amount of bacterias. These bacterias have the significant impact on our health. 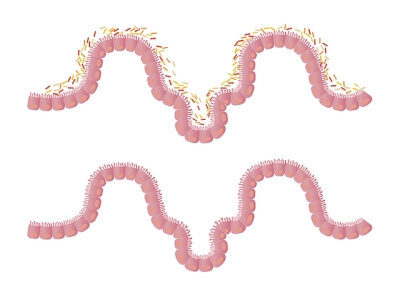 Benefits of Gut Bacteria for Brain

1.Gut bacteria produce neurotransmitters such as dopamine, serotonin, and GABA.

The neurotransmitter dopamine is responsible for messages between the brain and various body cells.

The neurotransmitter serotonin helps deliver signals from one brain area to another.

GABA or gamma-aminobutyric acid is a chemical which helps relax the mind and prepare it for sleep.

Stephen Collins, the scientist from McMaster University in Hamilton, Ontario discovered that bacteria lactobacillus and bifidobacterium could reduce anxiety -like behavior in mice.

Human beings carry these strains of bacteria in their guts too.

3. Gut bacteria may produce neuroactive chemical such as butyrate. The butyrate associated with reducing anxiety and depression.

4. John Cryan, the neuroscientist from University College of Cork in Ireland, points out that some of the gut bacteria can activate the vagus nerve.

The vagus nerve is the main line of communication between the gut and brain.

Can you imagine how important is to have a healthy gut bacteria?

You see that the gut bacteria for brain offers many benefits.

The Connection Between Gut Bacteria and  Type 2 Diabetes

Dr. Max Nieuwdorp, a researcher in Amsterdam, found out how to reverse type 2 diabetes. He did fecal transplantations for 250 participants in the studies. Diabetes was reversed changing the constitution of the gut bacteria. Does is not fascinating?

The Role of Environmental Factors

Researchers found out that our genes are responsible for about 10 percent of human disease. The rest 90 percents influenced by harmful environmental factors.

According to Dr. Perlmutter, “the gut microbiome is 99 percent of the DNA in your body, and it is highly responsive and changeable based upon lifestyle choices, most importantly our food options…”

The Gut Bacteria and Autoimmune Disease

Autoimmune diseases are famous with inflammation. When somebody has a leaky gut, he or she could be more able to get one of the autoimmune diseases. Leaky gut happens then substances from bowels leak to the bloodstream. Not so much fun, yes?

LPS or lipopolysaccharide is a chemical which covers particular bacteria groups in the gut. When LPS shows in the bloodstream, and plenty of antibodies are around, it means that people have a leaky gut.

Dr. Perlmutter describes successful stories about patients, which had great results after using some techniques. These procedures were probiotic enemas

or fecal transplantations. It sounds scary, but if people show improvement after these procedures, it is fascinating.

How to Nourish Gut Bacteria

In Perlmutter’s book Brain Maker: The Power of Gut Microbes to Heal and Protect Your Brain for Life, Dr. Perlmutter delivers message how to protect and nourish gut bacteria.

1.The Caesarian section can be the trigger to the risk for attention-deficit hyperactivity disorder (ADHD). The risk having autistic child increases twice. The child can struggle with allergies, type 1 diabetes and obesity. The researchers from Yale University developed the technique which helps the child get mother’s bacteria.

2. The breastfeeding helps the child to improve bacteria in his gut through skin contact.

3. The usage of antibiotics has side effects. Some groups of bacteria change after using antibiotics. One Firmicutes group get bigger and increases the risk to obesity. Animals get bigger when they fed with antibiotics.

4. According to Dr. Perlmutter, sugar, and high-fructose syrup increases the growth of disease-causing bacteria, fungi, and yeast. Fructose causes many problems such as inflammation and leaky gut.

5. Dr. Perlmutter does not favorite GMO food. Gut bacteria prefer normal food which consumed million years ago. Glyphosate, which  used on GM crops, has been found to alter the human gut bacteria

7. Prebiotic fiber such as dandelion greens, jicama or Mexican yam, onions, and leeks create the environment where gut bacteria is in the best shape.

Gut bacteria is vital for us as the guard and provider for good health. Having healthy and flourishing microbiome means that our minds will be sharp, the metabolism fast, the immune system will protect the body from invaders.

You can avoid many problems, associated with diseases such as Alzheimer and MS if you will take care of guts.

The serotonin, a neurotransmitter is a chemical which related to the feeling of happiness. Serotonin found in the gastrointestinal tract and central nervous system. What does it mean? It means that if gut bacteria is in good shape, the digestion and absorption of food goes smoothly. Serotonin is not affected by toxins which occur when food is not absorbed. It is funny how our mood depends on many factors. In this case, gut bacteria plays the important role. Besides it, the gut bacteria for brain plays the important role producing neurotransmitters.