I do not know from where came the habit to drink juice or water with ice? When we drink only liquids, everything is fine, except that the stomach reacts to coldness. It shivers and sends you curses. It is our body, but we torture it in various ways. 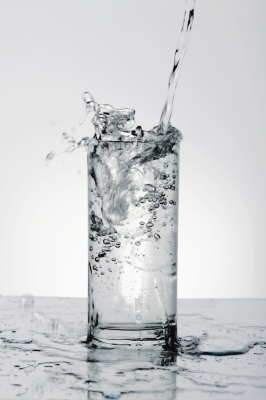 Should I Drink Water During Meals?

No. It is not okay for you or me. At first, when people healthy and younger, the body deals with harmful things. Later on, it gets tired.

Why Does Water Harm Us During Meals?

What Happens with Poorly Digested Food?

Food can not be digested without stomach acid. Diluted hydrochloric acid with water does not break down proteins. Proteins must be broken down to amino acids to travel to the intestine for absorption.

Most of us overeat. The stomach is full of food. Imagine what happens when food is undigested and not appropriately churned. It stays at a warm temperature for a while. Later on, it starts to ferment.

Undigested food slowly travels down through intestine feeding by the way bacteria and yeast. Yesterday is a nasty thing. Why? Plenty of yeasts produce toxins. Who needs intoxication? Unfortunately, nobody asks our opinion, especially the body.

We consume the wrong food, drink water during meals. What can we expect? It is not easy to change habits, but it is worth it.

Water is not recommended to drink during meals. Water interrupts digestion diluting stomach acid. Consequences are undigested food, unpleasant symptoms such as the production of gas, diarrhea, or constipation. Should I drink water during meals? NO. It is better to drink water between meals, especially if you feel hungry. According to Dr.Carolyn Dean, people mix feelings such as thirst and hunger. Water keeps us hydrated and out of snacking. We win in this situation.

After researching about the benefits of healthy eating, I found out that many years ago, the Russian scientists discovered that stuff in the stomach used to make x-ray images could not stay a longer time. This thing so-called porridge was cold, straight from the refrigerator. Radiologists did not have enough time to prepare equipment when stomach moved this stuff down to the intestine. Usually, the warm food stays in the stomach about 3-5 hours depending on the nature of food. In this case, cold “porridge” was moved.

This case was compelling, and doctors found out that cold food and cold water triggers the movement of swallowed food after twenty minutes from the stomach down to the digestive system. The food is not digested. We feel hungry and eat again. It leads to obesity.

Do you see the correlation between fast food and sodas? Nobody heats soda drinks. We swallow down various drinks flushing hot dogs and hamburgers. A couple of meals such as junk food will not hurt us. Unfortunately, constant usage will.

The stomach can not digest food properly. Proteins do not break into amino acids. What happens? When undigested food travels down to the intestine, it starts to spoil. Proteins quickly begin to rot. We need proteins for building blocks which are used in the body’s metabolism. What do we get? Bloating and lack of nutrients.

Do you drink cold water during meals? It would be great to hear your opinion. You can leave a comment below.