Chemical components in Spirulina provide nutritional value for everybody who consumes it. Flamingoes, human beings benefit from nutraceutical Spirulina.

Scientists point to three broad categories of nutrients found in Spirulina. It means that this little alga has more benefits as we can imagine.

For example,  the iron is biologically available and easily absorbed in the intestinal tract. 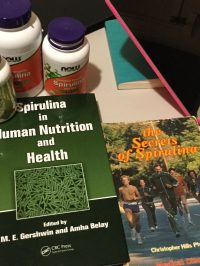 ,” …studies on the acute, subchronic, and chronic toxicity and mutagenicity of Spirulina have revealed no specific body or organ toxicity or genotoxicity.”(159)

Flamingoes, people who live by the lake of Chad, ate Spirulina and other algae hundred years. They are okay. I wonder how Spirulina, certified as the organic food supplement, grown in specialized farms, can be dangerous?

The Importance of Spirulina

Spirulina is nutraceutical food. Chemical components in Spirulina give for humans and all living creatures enormous benefits.

Antioxidant activity, antitoxic effects such as protective effect against toxic damage such as hepatotoxicity, nephrotoxicity, neurotoxicity, testis toxicity, cardiotoxicity, and ovary toxicity is reported in the studies of Spirulina.

Various therapeutic utilities of Spirulina described in the book Spirulina in Human Nutrition and Health.

Medical research has found out that Spirulina thanks to the excellent chemical composition of nutrients can help solve many health problems. Diabetes, arthritis, anemia, cancer, and other diseases eased by supplementation of Spirulina.

You can find Gamma Linolenic fatty acid just in Spirulina. The rest of the green superfood does not have at all.

These five green superfoods are nutritious, but they differ in the amount and intensity of chemical components.

I do not understand why Spirulina is not so popular as hamburgers or soda? We would always be in shape feeling good and without worries about chronic diseases. Of course, there are exceptions everywhere, but if somebody would tell what Spirulina does not have any value or it is toxic, please read Christophers Hills book The Secrets of Spirulina

. Christopher Hills mentioned the story about Toru Matsui, the Japanese philosopher, who lived on microalgae for the 15 years. How about it?

We do not need to be regularly eating Spirulina. We need variety. However, adding this miraculous alga which is rich with chemical components in Spirulina, we can win a lottery. Her name is peace of mind.