What is Spirulina? Part 1. Spirulina is a one-celled form of blue-greenish algae which formed on the Earth thousands of years ago. Spirulina was consumed by living beings as long as it recorded in food sources.

Food for Mayan and Aztec people

Spanish conquistadores conquered the Aztec empire in February 1519. The end for Aztecs was after two years. During this time, Spanish warriors found out that native people ate maize, squash,  beans,  and green scum. This green material was abundant on Lake Texcoco of the Teotihuacan Valley. Here the Mexico City stands today.

The name for this green scum was tecuitlatl. Aztec traded green algae and it as the food source. When Spanish came, they did not catch and understand the importance of blue algae.

Aztecs grew Spirulina on the floating gardens, so-called chinampas. The blue algae produced more protein than the land could provide. Unfortunately, conquistadores did not understand it, and they began to restore swamps and lake to make a tillable land surface.

Aztecs use Spirulina as the food source for proteins. Their civilization was notable for the large population, slavery, polygamy and barbarous customs such as ritual cannibalism and human sacrifice.

Mayans lived in Central America in a jungle environment. They developed waterways and artificially constructed ponds. Scientists think that these lakes probably for Spirulina, were dispersed through jungles of Yucatan Peninsula. Without Spirulina the Mayan population of two million barely could survive in forests.

The Rediscovery of Spirulina

A Belgian botanist Jean Leonard visited the Sahara Desert in 1964. When he reached Lake Chad, Leonard discovered that the local people were gathering and scooping a green scum with baskets. This green material was dried in the sun and later on eaten or traded as food on the local market.

After that, Japanese scientists became pioneers in research of Spirulina. In Japan, Spirulina used as food for commercial fish and domestic animals. Spirulina was used as the food supplement in some cases of diseases. 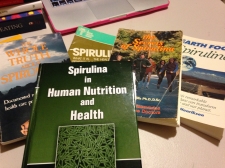 Researchers, Scientists, and Promoters of Spirulina

First time when I discovered Spirulina was twenty years ago. I became interested in Tianshi products. I lived in Europe at this time. As Tianshi Distributor, I read literature about herbal supplements and their influence on well-being. Doctors wrote their experience and expertise in books.

Tianshi company is worldwide. It had quarters in North America a few years ago.

I do not know the reason why they moved out. One thing that I understand from Cristopher Hills  Ph.D.  D.Sc. Books about FDA regulations that any food could not be sold as medicine or drug. Claims about the therapeutic effects of Spirulina could not be made in the USA.

There are books written by Japanese Doctors who made medical discoveries of Spirulina. The Secrets of Spirulina is one of these books.

The book by Jack Joseph Challem is Spirulina: what it is…the health benefits it can give you printed in the USA. Unfortunately, this mentioned book and other books written 30 years ago.

Time passed, but Spirulina was around, found in the lakes of Africa and Mexico. Spirulina is grown in Japan and in Mexico, in California too.

A couple of months ago, I discovered a book edited by M.E. Gershwin and Amha Belay. This particular book written by scientists and doctors. They performed enormous research about Spirulina and published these results in the book Spirulina in Human Nutrition and Health.

Finally, the resource, rich with experimental data, showed in the USA as valuable evidence for scientists, food industry researchers, doctors,  and consumers. We can learn from this book what is the Spirulina.